Like other critical components of getting the perfect brew, conical fermenters need to be closely observed. Fermentation is part art, which means you need to involve your senses: seeing, smelling, tasting. It’s also part science, which means that you need a way to confirm that each stage of the process is going according to plan: that the cleaning solution is fully rinsed, that there is no cross batch contamination, etc.  In short, you need a sight glass window on your vessel, and a light to illuminate its interior. 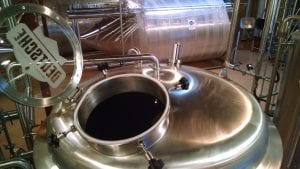 Conical fermenter sight glass lights come in various types and configurations. In my post today I’ll review some of your options, so you can choose the optimal light for your situation. By the way, although I’m focusing on fermenters, which may be conical or straight, the same advice will apply to any brewing equipment vessel, including mash lauter tuns, finishing tanks, and the like.

Usually the sight glass light is mounted over a window at the top of the vessel. The important thing to understand is the distance that needs to be illuminated. You’ll want a good view of the bottom of the tank, and some fermenters can be pretty tall. Make sure the light you specify is bright enough. For halogen lights, brightness is specified in watts. 50 watts is typical, maybe 100 watts.
LED lights are specified in lumens. As equipment manufacturers have been slow to adopt LED technology, there really isn’t a number of lumens that is typical. At the risk of appearing self-promotional, I can say that L.J. Star offers a 1000-lumen brew light, and everybody who sees it says that it’s way brighter than what they are using now.

For craft brewers, the most common means of mounting the light is with a sanitary clamp connection. This places the light flush over a dedicated light port, which is the most optically efficient configuration. It also provides the most hygienic connection, and it’s easy to disconnect if you ever need to remove the light to clean the lens or change the bulb (in case of a halogen).
Another option is to mount the light via a bracket mounted on a sight port. This has the advantage of allowing the same window to be used for visual inspections. In craft brewing equipment, generally I encounter two sight glass windows, one for the light, one for observation. Often one window is hinged, allowing it to serve double-duty as an access port.
Sometimes sight glasses have built-in lights. These are cost effective (you need only one sight glass window instead of two), but they don’t provide high light output.

A halogen bulb is paired with a reflector that focuses the light. LEDs are by nature more directional and a lens is used to focus the light. There really isn’t a lot of choice. Your light will come with a standard lens, either a spotlight or a floodlight. The beam spreads out at an angle, so the illuminated area increases with distance. See our white paper on spec’ing halogen sight glass lights for more details.
My favorite lens is has a 23 degree angle. For the size tanks that a craft brewer is working with, that angle makes the most efficient use of the light. I don’t recommend using a flood style lens unless you want a good look at the top of the tank/head of the beer.

Most lights operate on either 24 volt DC or 120 volt AC or come with an optional internal or external transformer that supplies the necessary AC or DC power. For halogen lights it is a surprising fact that lower voltage translates into higher brightness. Again, it doesn’t really matter in specifying because the transformer does the work.
By the way, LED lights consume roughly one tenth the power for the same amount of light, so if you want to show customers that you are hip to a green environment, then buy an LED Light.

The simplest way to control your light—turning it on and off—is with a manually operated switch located on the light itself. This should suffice in most cases, unless your craft brewery process is highly automated and you want remote control, such as when the light is paired with a video camera. The light manufacturer may offer a remote switching module or timing module that allows both manual and remote operation. Such modules are generally installed away from the vessel, mounted on the wall or inside a control cabinet.
LED lights already contain electronic components, so it didn’t take long for manufacturers to offer programmable computerized control, such as dimming and timed operation, albeit at a premium.
The switch may be vulnerable to washdowns, so make sure the light has the appropriate IP rating. Also the switch may provide crevices that could harbor bacteria. If that’s a concern then look for a light having a crevice-free switch.

In 2014 a couple of scientists won the Nobel Prize in physics for work that enabled the development of cool white LEDs. I’m talking about the color temperature of the light, not about LEDs that try to act cool like you did with your friends in high school. Cool white LEDs are the most effective at illuminating stainless steel vessels, because stainless steel reflects the blue end of the spectrum well.
I hope this post gives you an idea of your options and considerations when it comes to illuminating conical fermenters and other craft brew equipment through a sight glass. I’ll be happy to address your specific application, especially if it involves free samples of your craft.
Share Tweet Share Email