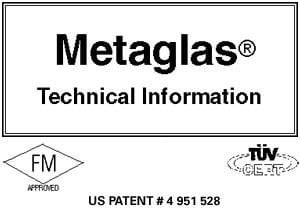 METAGLAS® is a registered trade name for a series of sight-window products of unmatched strength and integrity. They are made by melting circular glass inside a metal frame. This results in fusion of glass and metal. Upon cooling, the glass solidifies and the difference in the linear coefficient of thermal expansion between glass and metal then produces forces that create a uniform compressive stress throughout the glass. Because the glass prevents the metal ring from shrinking to its theoretical size, it remains in tension. This high degree of mechanically induced compressive stress makes METAGLAS the strongest and most secure glass for sight window or visual flow indicator applications.

Construction: Glass fused inside a metal ring Application: Clamping between flanges, e.g. as a replacement for conventional glass discs in sight windows and visual flow indicators.

3.1 Standard Disc Product Range Sizes (outside diameter and thickness) and tolerances to fit between:

Construction: Glass inside a smooth- bore threaded bushing, flush on bottom side

Application: Threading into a female out- let or cover plate

Compared with type 316, the annealed duplex alloys provide improved resistance to chloride stress-corrosion cracking. Another useful characteristic of the duplex grades is that they typically have yield strengths more than twice the conventional austenitic steels.
In thicker sections, the duplex alloys are more impact resistance than ferritic alloys.

Duplex stainless steels are alloyed with 0.15 to 0.20% Nitrogen. This minimizes alloy element segregation between the ferrite and austenite, thereby improving the as-welded corrosion resistance compared with the type 329 alloy. The nitrogen addition also increases the precipitation of austenite during casting and welding and prevents high-ferrite content in rapidly cooled welds.

Glass
Borosilicate 572°F Maximum temperature gradient through the glass The glass must always be circular and must lie inside (and therefore may not protrude outside) the metal frame.

Repolishing
Contrary to conventional glass discs, which must be discarded, METAGLAS windows which have suffered chemical or mechanical damage (opacity, erosion, scratches) can often be repolished. Consult factory.

Stress Cracks; Air Bubbles
METAGLAS discs may exhibit hairline cracks or contain bubbles. Both are inherent in the manufacturing process but due to the mechanical prestresses neither affects the utility or the security of the glass.

This is in contrast to conventional glass discs, which must be discarded at the first sign of a crack.

METAGLAS® products have been tested and approved by safety testing departments of several major chemical and other companies under a variety of conditions, most exceeding those normally encountered in practice.

Impact Testing
An impact of 36 Nm (maximum capacity of the test apparatus) on a 15mm thick METAGLAS disc using a 3-kg drop hammer resulted in local pitting of the glass which affected neither its functioning nor its tightness. By contrast, an impact of 15 Nm on a conventional glass disc resulted in complete shatter.

Bending
A 20mm thick METAGLAS disc was mounted between flanges using 2mm thick IT-300 gaskets plus one short 2mm thick gasket fragment to create unevenness. Tightening the flanges with bolts and nuts with a torque of 130 Nm resulted in cracks in the glass, but the glass remained leak-tight. The same test repeated with loose glass discs resulted in complete shatter between 40 and 55 Nm.

Erosion
After being agressively eroded from a thickness of 15mm to 6mm, a METAGLAS safety glass disc resisted bursting pressure of 1,230 psig before the gasket failed.

Altering the shape of a METAGLAS sight window, such as drilling holes, turning, etc. can lead to excessive build up of heat or disturbance of the metal/glass equilibrium, and therefore is discouraged. If it cannot be avoided, consult factory before proceeding.

Preferred practice is to fully specify a METAGLAS design, including any and all holes, with the inquiry and subsequently with the order. This is because the physical properties of these products are a function of the stresses created between the glass and the surrounding metal due to differences in their thermal coefficients of expansion. These stresses are composite and among others include radial compressive and circular tensile stresses in the metal.

The absolute strength of a METAGLAS product therefore is a function not only of glass diameter and thickness but also of the dimensions and shape of the surrounding metal. Changing the shape or dimensions of the metal may disrupt the stress patterns. This may destroy crucial product characteristics such as pressure rating and must be avoided. Inclu
ded, for example, are drilling of holes in the finished product, altering the size or nature of existing holes (e.g., converting smooth-bore to tapped or vice versa), machining or otherwise removing some of the metal, etc.

METAGLAS sight windows may be equipped with accessories such as sight lights, window wipers, etc. However, any intended accessory should be specified with the METAGLAS order to allow for pre-drilling of the METAGLAS ring (see section; REWORKING).

On request, and for a fee, METAGLAS sight windows can be pressure tested at the factory at room temperature, in the presence of either a factory inspector or an inspector of an outside, authorized inspection agency. Unless specified differently, pressure tests will be performed at 4/3 x rated operating pressure and the outside inspection agency will be TÜV.

Manufactured in Accordance with the Following Standards:

Manufactured with Approval From the Following Organizations: 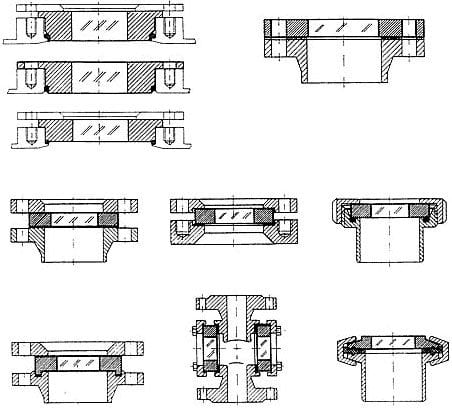 Comparison of Degradation of Borosilicate vs. Soda Lime Glass in Water 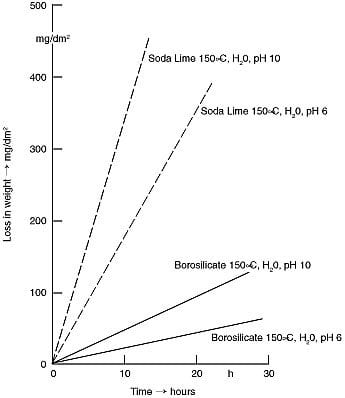 In investigating for chemically induced disintegration of Soda Lime and Borosilicate Glass, it was found that Borosilicate was much more resistant.

This occurred not only at slightly acidic conditions (pH 6), but also when the pH was raised to a value of 10 (alkaline). As shown on the chart, the degradation of Soda Lime glass is 10 times greater than that of Borosilicate glass. This considerable divergence in resistance properties begins at 134°C, the initial temperature in the study. 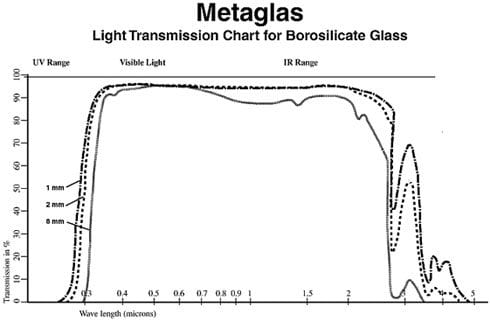 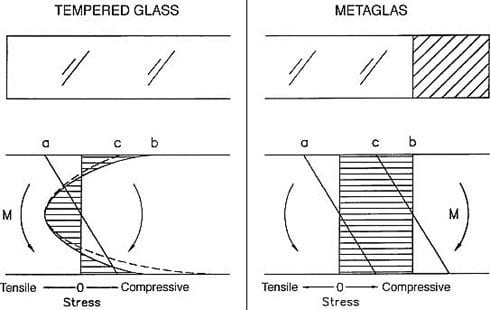 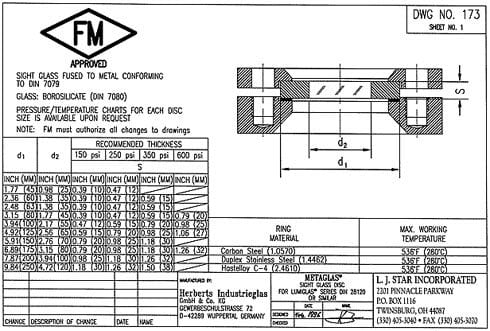 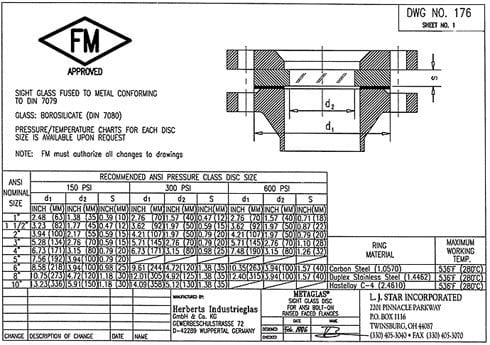 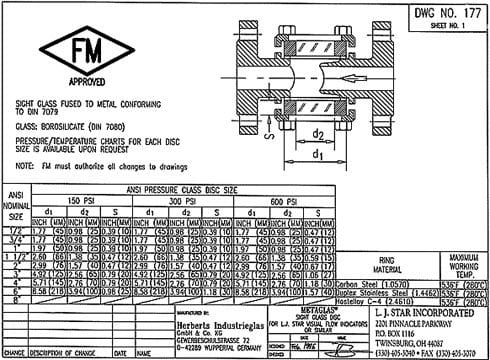 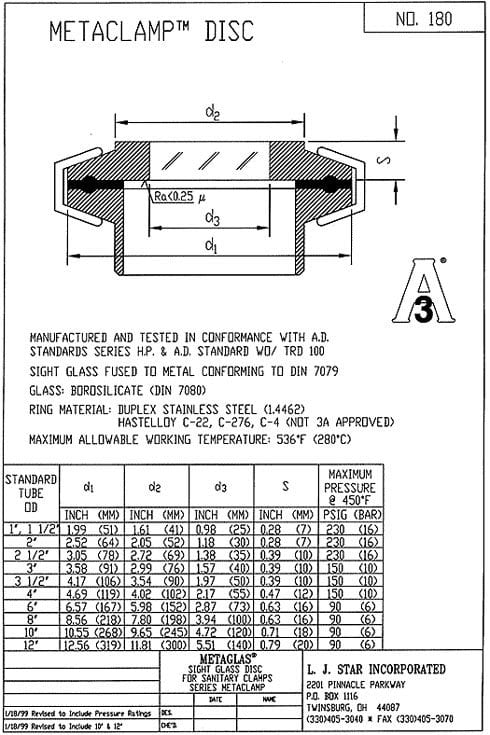 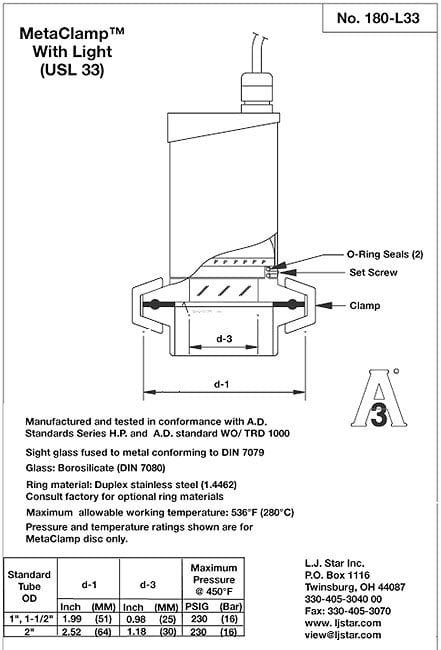 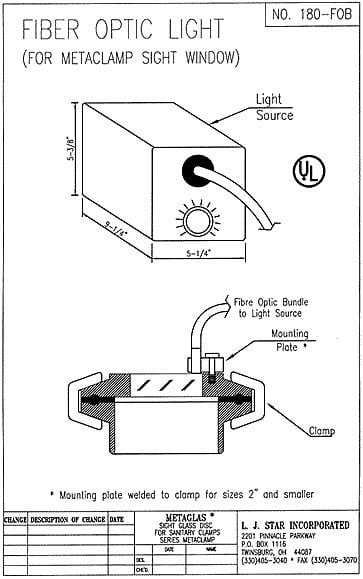 A Selection of Other METAGLAS Products and Configurations 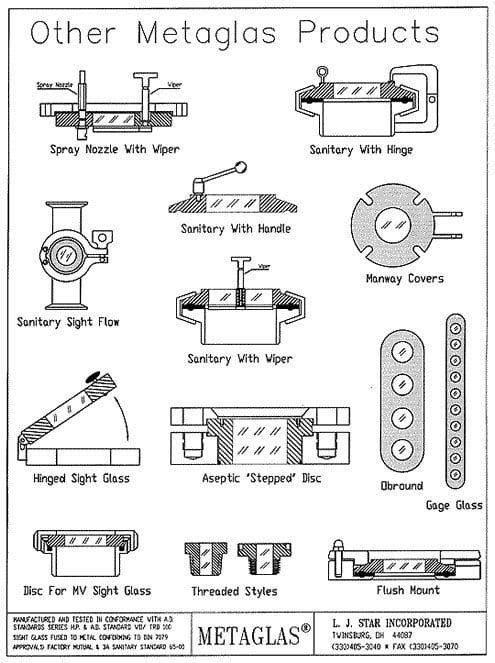 Impact Test
Following the pressure test, each sample will be heated to the rated temperature. The heat source will be removed, the sample will be pressurized to 100% rated pressure and a 0.5 kilogram ( 1.1 pound ) steel ball will then be dropped onto the glass lens from a height of 5 feet ( 152 cm ). At the end of this test, cracks in the glass lens are allowed, but, there shall be no loss of pressure when the sample is hydrostatically pressurized to 100% of the rated pressure.

Thermal Shock Test
Following the impact test, each sample will be heated to the rated temperature. A stream of room temperature water at a minimum pressure of 40 psig will be directed onto the glass lens for 1 minute. During this time the heat source will be removed. Cracks in the lens are allowed, but there shall be no loss of pressure when the sample is hydrostatically pressurized to 100% of rated pressure at the end of the test.

Because of their expertise in the glass and paint fields, the Herbert’s companies worked together to develop glass beads in paint. This new paint was used for reflective road stripes and road signs. During the 1970’s, Herbert’s decided to expand the glass products division to include sight glasses for pressure vessels.

At the beginning, they offered conventional plain glass windows to the various chemical companies in Europe. Due to the risks involved with using conventional sight glass windows, Hoechst-Celanese contacted Herbert’s and asked them to develop a safer sight glass. At first, Herbert’s proposed the commonly known styles of safety sight windows, such as dual glass windows, windows with Plexiglas shields and glass with laminated wire or two pieces of glass laminated together.

Herbert’s Industrieglas was in the business of glass making for years; their main products included test tubes, beakers and other blown glass products. The family was also in the paint manufacturing business for many years, and in the 1970’s, sold the paint division to Hoechst-Celanese, who in 2000 sold it to Dupont.

It was later determined that even though these designs offered a slightly higher degree of safety, the glass was still susceptible to failure. It was at this time that Herbert’s, in cooperation with Hoechst-Celanese, started to experiment with fusing glass to metal. Although this technology had been known for some time, it was primarily done with materials that were not suitable for the chemical processing industry, such as Soda Lime Glass. Due to the enormous costs involved in developing this new safety sight glass, Herbert’s was forced to ask Hoechst-Celanese for assistance.

As time went on, and costs continued to mount, it was determined that more help in developing this product was required. Herbert’s, with the assistance of Hoechst-Celanese, then contacted Bayer AG and BASF. With the assistance in funds, testing, and technical help, these three large chemical companies became instrumental in helping develop what is known today as METAGLAS. Their reasons for assisting in the development were purely personal – they wanted safe sight glasses in their facilities, where there would be no risk of injury or failure. As the METAGLAS became more and more popular, it was decided that a DIN standard was needed for the process of manufacturing- Bayer AG helped write this standard, now known as DIN7079.

Use and Care of Standard Sight Glass Windows
(Non-METAGLAS types)

Warning
Improper installation or maintenance can cause glass breakage which may result in bodily injury. Wear safety glasses when looking through a sight glass on operating process equipment.

Once a sight glass has been removed from its mounting in process equipment or a boiler, regardless of the reason for removal, discard the glass and substitute a new piece. Used sight glasses may contain hidden damage and present safety risks.